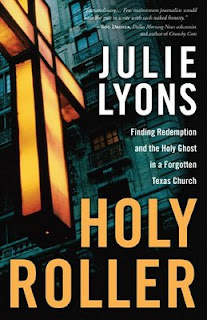 Julie Lyons was working as a crime reporter when she followed a hunch into the South Dallas ghetto. She wasn’t hunting drug dealers, but drug addicts who had been supernaturally healed of their addictions. Was there a church in the most violent part of the city that prayed for addicts and got results?
At The Body of Christ Assembly, a rundown church on an out-of-the-way street, Lyons found the story she was looking for. The minister welcomed criminals, prostitutes, and street people–anyone who needed God. He prayed for the sick, the addicted, and the demon-possessed, and people were supernaturally healed.
Lyons’s story landed on the front page of the Dallas Times Herald. But she got much more than just a great story, she found an unlikely spiritual home. Though the parishioners at The Body of Christ Assembly are black and Pentecostal, and Lyons is white and from a traditional church background, she embraced their spirituality–that of “the Holy Ghost and fire.”
It’s all here in Holy Roller–the stories of people desperate for God’s help. And the actions of a God who doesn’t forget the people who need His power.


Author Bio:
Julie Lyons is an award-winning writer, editor and investigative reporter who for more than 11 years served as editor-in-chief of the Dallas Observer, an alternative weekly newspaper owned by Village Voice Media. She holds a master’s degree in journalism from Northwestern University and a B.A. in English from Seattle Pacific University. She and her husband, Larry Lyons Jr., live in Dallas with their son.

I have one copy to give away. Leave a comment below to be entered to win!

UPDATE: Ruth is the winner of the book. Congrats Ruth!
Posted by Suzanne at 11:30 AM

WOW!! I don't think I've ever read Pentecostal fiction. Another book to add to the list.
Ruth