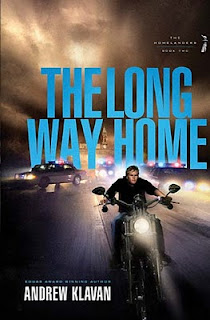 The Long Way Home by Andrew Klavan is the second installment in his Highlanders series for young adults. I wasn't fortunate to read the first but don't feel like I missed any part of the story by starting the series with the second book.

This book follows Charlie as he tries to put together the pieces of the year-he-can't-remember. It begins with a high speed chase in which Charlie attempts to get away from the bad guys and the good guys (the police!) and flee to a place of safety. Charlie gets help from unexpected places and reassurance that those he loves believe that he isn't guilty of murder. Charlie then begins his quest to seek the real answers. He follows hints that he found in newspaper articles and tracks down those he thinks may have the answers.

This was a fast-paced book that was one adventure right after another. Very enjoyable and sometimes nail-biting. Every young person who loves a good story will enjoy this one (and maybe their parents will too!)

This book is from Thomas Nelson and was provided for review as part of their BookSneeze program. (YUCK! I hate that phrase...it sounds so germy and wet.)
Posted by Suzanne at 2:28 PM