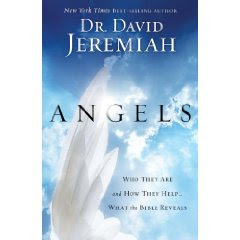 My husband agreed to be a guest reviewer for this book. Here's his take on it:

With so many thoughts and ideas being thrown around about who and what angels are and look like, it was great to come across a book that gives an in-depth biblical accounting of angels. Dr. David Jeremiah’s book Angels, seeks to establish truth on the matter using the Bible and the thoughts of theologians as his defense.

For believers who struggle to scripturally answer questions of angels when raised by friends and family, or for those who think that we all become angels when we die, Angels is essential reading. Even if there are just a few nagging questions that linger in the back of your mind concerning your understanding of angels, Jeremiah will help you to root yourself in God’s Word so that you’ll no longer be caught up in the confusion about angel's.

The book begins with a quick tour of angels in the Bible—showing us that human beings are not to worship angels, but merely to acknowledge them as servants of the Living God. Jeremiah says more angels do not appear to humans because it is unnecessary and human beings have a tendency to worship the angels as the Apostle John did twice while an angel was sharing visions with him—visions that would become the book of Revelation. Stamping out myth after modern myth, Jeremiah repeats his main points often.

Jeremiah’s arguments and his assertions about angels are well-defended with Scripture. Angels digs deep into the Bible to collect the truth about angels. Many of the oft asked questions concerning angels are answered with scriptural references. Dr. Jeremiah's book is certain to clear up some if not most of the questions you might have concerning the subject of angels; his gathering of relevant verses and survey of the Bible has proven to be both reassuring and revealing.

Dr. Jeremiah's clear and simple teaching remains focused on God’s glory, and that of His Son, eschewing any adoration or fascination with angels for their own sake apart from their Creator. Angels has become a part of my pastoral library one I am sure that I will reference often.
About the book:

What are angels? What is their role in God’s plan? Are they present? Do they appear? Do they give us personal insight about our work, our worship?

Many contemporary beliefs about angels are based on misconception and myth. Dr. David Jeremiah uses scripture to unveil the remarkable truth about these agents of heaven, and their role and work in our world—and lives.

More than 60,000 units of this powerful book have sold in two past editions. This repackage of the original 1996 paperback will surely capture the attention of readers of all ages who seek a broad and thorough survey of scripture that clearly separates fact from fiction as it relates to angels. The book will appeal to the thousands who follow Dr. Jeremiah’s books, and radio and TV broadcasts.

Dr. David Jeremiah is senior pastor of Shadow Mountain Community Church in San Diego, and founder of Turning Point Radio and TV Ministries. His radio program is carried on over 2,500 stations worldwide, while the TV broadcast is received by 500 million homes via cable and satellite. The recipient of numerous awards for broadcast excellence, his books have garnered Gold Medallion awards and become bestsellers with The Wall Street Journal, USA Today, and the New York Times. He is a sought-after conference speaker by organizations nationwide.

Click here for more info or to purchase this book.

*Ruth is the winner of this book. Thanks for entering, Ruth!

After reading a Dekker book, I need to learn more about REAL :) angels and their work on earth!!
You can add my name to your drawing! Good review, Pastor!
Ruth