Life, In Spite of Me by Kristen Jane Anderson 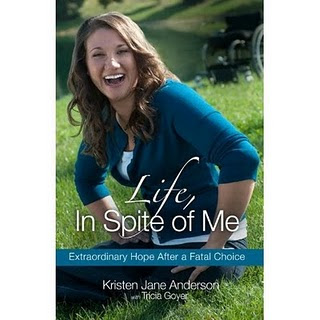 Life, In Spite of Me by Kristen Jane Anderson (with Tricia Goyer) is the incredible story of one girls triumphant battle from depression and suicidal thinking to a life full of purpose. If you're stuck just muddling through life and are tired of nothing having any meaning to it then you must read this book. Kristen grew up in a Christian home, went to church every week and knew all of the right things, but was still missing something. When faced with several tragedies in a short amount of time she ended up falling over the edge herself and lived through her suicide attempt. Her journey back to life includes the moment she realized that she needed to quit living her so-called "Christian" life and make the decision to have a real relationship with Jesus Christ. Once she truly gave her life to the Lord she found the hope that many people (even church going people) are missing. Her story is one of hope in a world of hopelessness. It is a reminder that we cannot do it ourselves. Very well written and easy to read. This book has the potential to change many lives.
About the book:

Why does my life have to be so painful?
What’s wrong with me?
It’s not going to get better.
It could all be over soon, and then I won’t hurt anymore.

Kristen Anderson thought she had the picture-perfect life until strokes of gray dimmed her outlook: three friends and her grandmother died within two years. Still reeling from these losses, she was raped by a friend she thought she could trust. She soon spiraled into a seemingly bottomless depression.

One January night, the seventeen-year-old decided she no longer wanted to deal with the emotional pain that smothered her. She lay down on a set of cold railroad tracks and waited for a freight train to send her to heaven…and peace.

But Kristen's story doesn’t end there.

In Life, In Spite of Me this remarkably joyful young woman shares the miracle of her survival, the agonizing aftermath of her failed suicide attempt, and the hope that has completely transformed her life, giving her a powerful purpose for living.

Her gripping story of finding joy against all odds provides a vivid and unforgettable reminder that life is a gift to be treasured.

Includes notes of encouragement Kristen wishes she had received when she was struggling most.

“Life, In Spite of Me is a remarkable story of life beyond despair and hope that triumphs over tragedy.”
—Louie Giglio, pastor, Passion City Church/The Passion Movement

“Suicide is a liar and a thief. It promises peace to those who are escaping but delivers unimaginable pain and rejection to those left behind. Kristen Jane Anderson’s riveting story unmasks the thief and gives hope a face.”
—Dr. Dennis Rainey, president, FamilyLife Ministries

“When I first met Kristen, I was overwhelmed with her smile, and then I saw her wheelchair. It was a defining moment for me. I had not heard her story or why she’d ended up at Moody. But it was her smile—and it is still her smile—that dismantles me. Kristen has something. It is something otherworldly. She had every reason to die, but now she has every reason to live. I hope you’ll read her story, see her smile, and know why she lives.”
—Michael Easley, former president, Moody Bible Institute

To purchase this book visit Multnomah.

This book was provided for review by Waterbrook Multnomah.