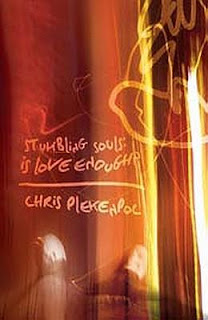 In Stumbling Souls: Is Love Enough by Chris Plekenpol we read the true story of how Chris meets, befriends and invites into his home a homeless man named James. All in the name of Christ. Some of his friends supported him and some warned him that he was being taken for a ride. Chris just wanted to help change the life of one man. I'll not share what happened, how the story ends, but I will say that I loved this book! One of the best non-fiction that I've read in a long time. Too many of the recent non-fiction "How to be a better Christian" type books reek of arrogance, this one does not. Never once did I feel like the author was trying to say, "Look at me, look at what I did for Christ..." He was just being a humble servant. Kudos, Chris!
About the book:

What does it look like when believers dare to radically love those who are the hardest to love but most desperate to be loved?

In Stumbling Souls, former Army captain and recent seminary graduate Chris Plekenpol tells the compelling story of his interactions with a HIV-positive, homeless man, James. Chris asks James to move in with him, and then Chris and his friends try to help James get back on his feet. In reality, James helps Chris get back on his feet by finding out what happens when believers risk living out their faith in a tangible way.

Q: Stumbling Souls tells of the lessons you learned about faith after having met James, a homeless man off the street who attended the newcomers’ meeting at your church one day. Why did you reach out to him? When you saw him walking away from church that day, why did you call after him?

A: For any disciple, there comes a time when learning Christ must become living Christ. As much as I was enjoying learning and being at seminary, the greatness of my seminary experience was complete only when the miraculous intangibles of God’s character became real in me. That day something awakened deep inside of me—maybe in the place where a small filling of the Holy Spirit resides. I couldn’t take my eyes off the figure walking away, and something inside me stirred. I tried to quell the desire to stop him and find out about his life. And before I knew it, my legs started walking after this stranger who had no idea of the welling up of something in my soul.

Q: How did you know God was leading you to reach out to James and serve him in the radical manner that you did?

A: One of the ways God really revealed his leading to me was through the encouragement of others, both friends and strangers. I began blogging about James and one reader contacted me and said he would like to help financially. He literally tracked me down to tell me in order to give something to help James. Not only did he give something for James. He personally encouraged me. There were moments like those when God intervened and let me know he was watching. No, they don’t come every day, but they serve as reminders that he wants me to live by faith.

Q: As readers make their way through Stumbling Souls, they will find themselves rooting for James, wanting him to change and turn his life around, and impatient when it doesn’t happen quickly and he seems to take some wrong turns. Why did you not give up on him?

A: I knew, as I said, that God was calling me to live by faith, but of course that was, at times, so difficult because I wanted to see results. I wanted to see life change, and when that didn’t happen, I got frustrated. But in one of those moments of discouragement this thought hit me. I don’t serve James because of James; I serve James because of God. So James’ actions don’t matter. If James never gets on his feet and I do an exercise in futility, it doesn’t matter, because my God told me to always remember the poor. So here I am doing it. Here I am living this thing called faith.

Q: “Is Love Enough?” is the subtitle of Stumbling Souls. But isn’t that exactly what we’re called by God to do, to love others?

A: Yes, we are. We are called to love and to serve. But I’ve found that our human love isn’t perfect. Selfishness and pride leave much to be desired, and, therefore, our love is never enough. I don’t have the ability to love unconditionally outside of Christ. That is why the only love that will ever be enough is the love of God. He gave his only Son to die on a cross for the sins of the world, and then he gets involved in the mess of ministry, of our working out our salvation with fear and trembling, by using flawed people to piece together another person’s redemption so that only he gets the glory.

Q: How do you believe God changed you through this experience?

A: I went from a Christian ideologue to a person who has an understanding of life on the streets and an understanding of how Christ makes believers righteous on the basis of grace, by means of faith. Through this process I really saw my own growth and I hope that those who read this story will see that too, the way that God used James to change me. I can’t help but notice the difference. I have more compassion. I have a deeper love for the lost. I have a better grasp at how rotten I can be in my own sufficiency. There wasn’t just one stumbling soul in this book; my sins were pretty apparent, and God is still working on my selfishness and pride. I know that with God all things are possible.