Her Daughter's Dream by Francine Rivers 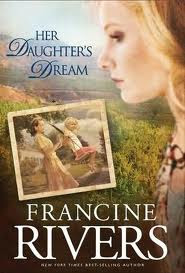 In the dramatic conclusion to the New York Times best seller Her Mother’s Hope, Francine Rivers delivers a rich and deeply moving story about the silent sorrows that can tear a family apart and the grace and forgiveness that can heal even the deepest wounds.

Growing up isn’t easy for little Carolyn Arundel. With her mother, Hildemara, quarantined to her room with tuberculosis, Carolyn forms a special bond with her oma Marta, who moves in to care for the household. But as tensions between Hildie and Marta escalate, Carolyn believes she is to blame. When Hildie returns to work and Marta leaves, Carolyn and her brother grow up as latchkey kids in a world gripped by the fear of the Cold War.

College offers Carolyn the chance to find herself, but a family tragedy shatters her newfound independence. Rather than return home, she cuts all ties and disappears into the heady counterculture of San Francisco. When she reemerges two years later, more lost than ever, she reluctantly turns to her family to help rebuild a life for her and her own daughter, May Flower Dawn.

Just like Carolyn, May Flower Dawn develops a closer bond with her grandmother, Hildie, than with her mother, causing yet another rift between generations. But as Dawn struggles to avoid the mistakes of those who went before her, she vows that somehow she will be a bridge between the women in her family rather than the wall that separates them forever.

Spanning from the 1950s to present day, Her Daughter’s Dream is the emotional final chapter of an unforgettable family saga about the sacrifices every mother makes for her daughter—and the very nature of unconditional love.

Francine Rivers began her literary career at the University of Nevada, Reno, where she graduated with a bachelor of arts degree in English and journalism. From 1976 to 1985, she had a successful writing career in the general market, and her books were highly acclaimed by readers and reviewers. Although raised in a religious home, Francine did not truly encounter Christ until later in life, when she was already a wife, a mother of three, and an established romance novelist.

Shortly after becoming a born-again Christian in 1986, Francine wrote Redeeming Love as her statement of faith. First published by Bantam Books and then re-released by Multnomah Publishers in the mid-1990s, this retelling of the biblical story of Gomer and Hosea, set during the time of the California Gold Rush, is now considered by many to be a classic work of Christian fiction. Redeeming Love continues to be one of the Christian Booksellers Association's top-selling titles, and it has held a spot on the Christian best-seller list for nearly a decade.

Since Redeeming Love, Francine has published numerous novels with Christian themes—all best sellers—and she has continued to win both industry acclaim and reader loyalty around the globe. Her Christian novels have been awarded or nominated for numerous honors, including the RITA Award, the Christy Award, the ECPA Gold Medallion, and the Holt Medallion in Honor of Outstanding Literary Talent. In 1997, after winning her third RITA Award for inspirational fiction, Francine was inducted into the Romance Writers of America's Hall of Fame. Francine's novels have been translated into over 20 different languages, and she enjoys best-seller status in many foreign countries, including Germany, the Netherlands, and South Africa.

Francine and her husband, Rick, live in northern California and enjoy time spent with their three grown children and taking every opportunity to spoil their grandchildren. Francine uses her writing to draw closer to the Lord, and she desires that through her work she might worship and praise Jesus for all He has done and is doing in her life.

How has exploring the relationship between your mother and grandmother helped you understand yourself?

This is a question I would love readers to ask themselves at the end of Her Mother’s Hope. I realized early in the story that I have many of my grandmother and mother’s character traits, both good and bad. They both had tempers. So do I. They both had low self-esteem. I’m always striving to “measure up”. They both chose spouses who respected them. So did I. Both women had strong faith and servants’ hearts, something they encouraged in me. My mother extended grace to others -- a trait I want to cultivate to the end of my days. By holding onto her anger, Grandma lacked the peace and joy she could have had in her last years. I tend to relive past hurts. Writing about Marta made me decide to let go, forgive and move on. For whatever reason, Grandma couldn’t and missed out on so much joy in her last years. Sometimes people deeply hurt as children take offense where none was intended. Holding a grudge causes suffering, especially for the one who won’t let go. Jesus said to forgive one another as He has forgiven us. Forgiveness frees us, even if the other person refuses to join in the process of reconciliation. As I examine my own life, I see how much I’ve been forgiven. How can I not extend God’s grace to others? The best way to experience the fullness of God’s presence in my life is to surrender it to Him. And in that surrender, we are made more complete and joy-filled.

Mother-daughter relationships are often complicated and fraught with emotional land mines. What was your approach to exploring the complexity of those relationships in a fictional setting?

Questions, lots of questions! Every time I told someone I was working on a book about mother-daughter relationships, people wanted to share their family stories. As I wrote Her Mother’s Hope, I wanted readers to see through each woman’s eyes, and understand how the past shaped each in the way she responded to her mother. Hildemara doesn’t believe her mother loves her, but it is out of Marta’s pain and loss that tough-love techniques were forged. Marta wants to strengthen her daughter for whatever lies ahead. Sometimes what we view as rejection can actually be an act of sacrificial love. We seldom know the experiences that shaped our mothers, the deep hurts, traumatic events, broken relationships. I hope women who read this book will want to share those things with one another.

Writing a novel is not for the faint of heart. What was the most difficult part of writing this family saga? What came the most naturally to you?

The most difficult part of writing any novel is getting out of my own way. I have to get rid of preconceived notions about themes and characters and plot. The first draft of this novel came in at over 1000 pages and was too biographical. I wanted the story to shift back and forth from present to past, trying to show what happened to create the rifts and valleys between Hildemara, Carolyn and May Flower Dawn. I was too cautious, too afraid to harm to my grandmother and mother’s memory.

A wonderful editor wrote me an insightful letter in which she listed what she wanted to know about each the characters. Her letter got my creative juices flowing. She helped me look at the story in a new way. I set the first manuscript aside and started over. I found it better to move from one generation to the next in a linear story. This time the characters followed my grandmother and mother’s timeline, but took on a life of their own. They became unique individuals rather than the shadow of real people.

After readers finish this series what do you want them to remember? What questions and feelings do you want it to provoke on a spiritual and emotional level?

I hope and pray readers who have had difficult relationships with their mothers or daughters will let go of the pain and anger and allow God to work in their lives. God can work all things together for good for those who trust and love Him. Following Jesus’ example changes the way we see people. It changes the way we relate to one another. Even when the chasm is too deep to cross, we can decide to forgive. Some people wear grievances like a dirty coat. With God’s strength, we can strip it off and be free. When people finish reading Her Daughter’s Dream, I hope they will want to extend God’s grace and forgiveness. I hope they will tear down their walls and use their life experiences to begin building a bridge.

Who do you see as the audience for this story, and does that differ from your previous readership?

I am fortunate to work with Tyndale House. If a writer does well in one genre, publishers encourage the writer to continue in the same genre. Tyndale has given me the freedom to go wherever the story leads. I have done historical as well as contemporary. This two-part saga was intended to be one LONG book. Splitting the story into two parts made it more affordable for readers, and eliminated the need to delete entire sections. Hopefully, both women and men will enjoy Her Mother’s Hope and Her Daughter’s Dream. Men play a strong role in the lives of all four primary characters: Marta, Hildemara Rose, Carolyn and May Flower Dawn. And both books have much to do with faith, how it presents itself, how it grows, often under difficult circumstances and in unexpected ways.

Where may we connect with you further or to purchase a copy of HER DAUGHTER'S DREAM?

I would love for you to visit my web site at http://francinerivers.com/, browse through the various events and other resources available, as well as sign up for my mailing list. You may also join me on my Facebook page, please click'>http://www.facebook.com/FrancineRivers?ref=ts">click here.


Watch a trailer of this book here.