The Blackberry Bush by David Housholder 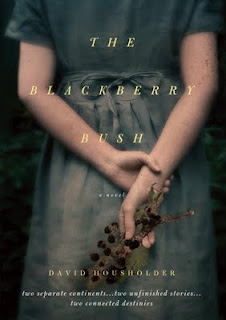 The Blackberry Bush by David Housholder is one of the strangest books I've ever read. It begins with Angelo (the angel) telling the reader to, "...uncover your own backstory that will change you in ways you can never imagine. And you'll never be the same again..." With that big of a statement I truly thought I was in for something special. Perhaps if I had never taken time to contemplate my own life in the scheme of eternity it may have spoken to me like a lightning bolt in my foggy mind, but having acquianted myself with the Bible from a young age I've never gone for a moment without knowing that everything is woven together by the Lord. An arrogant statement to begin a book with in my opinion.

This story follows several people and how their lives are woven together through the years until the culmination of a near disaster. I found it very hard to read, it didn't grasp my attention and while the end notes say that it's laced with symbolism (some that needs to be dug deep to be found) I didn't think it was all it was promised to be.

Yes, I was disappointed, but I do have a friend who saw this book from a totally different view and she loved it. You can read her review here. Just goes to show you that not every reader will love every book.

About the book:
Some mistakes are just a part of the bigger plan.
Can the lives of two strangers intertwine to influence the world?
Have you ever wondered if there is a bigger plan to your life or if everything just happens by chance? In his newest book, The Blackberry Bush, David Housholder will take you on a journey across two continents to discover that your life may be bigger than you think and that even the worst of mistakes can find redemption. While on this journey, he will also examine today’s youth cultures and their complex relationship with the Christian faith.

According to Housholder, “We are all products of an extensive root system, whether or not we believe it or acknowledge it.” The tapestries of our lives have been woven together using the pasts of our parents, grandparents and generations before who influenced who we will become. But we can take the mistakes from their pasts and weave them into something beautiful in our futures. We can be a product of generational blessings and generational curses, but it is up to us to sort it out.

The Blackberry Bush begins with two babies, Kati and Josh, who are born on opposite sides of the world at the very moment the Berlin Wall falls. You would think that such a potent freedom metaphor would become the soundtrack for their lives, but nothing could be further from the truth. They will follow a parallel path connected by a mistake their great grandparents made years before.

Despite his flawless image, Josh, an artistic and gifted Californian skateboarder and surfer, struggles to find his true role in the world. He fears that his growing aggression will eventually break him if he can’t find a way to accept his talent and the competition that comes along with it. Kati, a German with a penchant for classic Swiss watches and attic treasure-hunting, is crushed with the disappointment of never being “enough” for anyone—especially her mother. She wonders whether she will ever find the acceptance and love she craves and become comfortable in her own skin.

Craving liberation, Kati and Josh seem destined to claim their birthright of freedom together. With the help of their loving grandparents, they will unlock the secrets of their pasts and find freedom and joy in their futures. Today, like Katie and Josh, our youth often fall into two different cultures. Josh is part of the “bro” culture which is outdoor-oriented, with sports as a focus, and generally more conservative. Whereas Kati is part of the “scene” culture which is more liberal and indoor-oriented, focusing on music. These cultures are apparent in the novel and can aid in a better understanding of the issues today’s 21st century youth are facing as well as the struggles they have in coming to faith.

“The Blackberry Bush is a beautifully written novel of two characters’ search for meaning and their powerful rescue from the relational and societal expectations that are crushing them. It’s the story our own hearts might tell from our journey through life,” says Debby Griffith, radio host of Everyday Matters. Housholder’s journey will take readers into the deepest recesses of the soul while pulling them from their own thorny thickets. And along the way we may just discover a life of redemption and meaning.

View the trailer for The Blackberry Bush here.

This book was provided for review by The B&B Media Group
Posted by Suzanne at 4:44 PM

As I was reading I thought, "Nope, Suzanne won't like this one." LOL

I researched the authors church and he is a pentecostal pastor with ministries as unique as his writing.