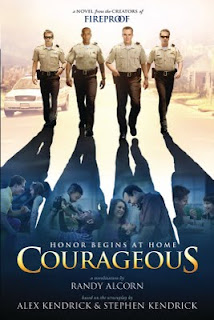 Courageous, by Randy Alcorn, is based on the screenplay by Alex Kendrick & Stephen Kendrick, the same two who brought us the Christian film, Fireproof. For me, this book was very hard to get into. It felt like the authors were trying too hard to get the message of the book across to the reader. Almost every page mentioned something about being a good father to your children. It was overkill. I was disappointed that it was mentioned too often. Randy Alcorn is one of my favorite authors and I understand that he had a screenplay to work with and it may have been mentioned a lot in that, but I wish he'd have been able to tone it down a little. I felt like a kindergartener who had to be told the same thing over and over again. I am planning to watch the movie because I do believe in the message. I just don't feel that it was well executed in print.

From the back cover:
Four men, one calling: To Serve and Protect.
As law enforcement officers, Adam Mitchell, Nathan Hayes, and their partners willingly stand up to the worst the world can offer. Yet at the end of the day, they face a challenge that none of them are truly prepared to tackle: fatherhood. While they consistently give their best on the job, good enough seems to be all that they can muster as dads. But they're quickly discovering that their standard is missing the mark.
They know that God desieres to turn the hearts of fathers to their children, but their children are beginning to drift farther and farther away from them. Will they be able to find a way to serve and protect those weho are most dear to them?
When tragedy hit home, these men are left wrestling with their hopes, their fears, their faith, and their fathering. Can a newfound urgency help these dads draw closer to God...and to their children?

This book was provided for review by Tyndale.

Suzanne,
With the target audience being men, I felt RA hit the mark. Myself and all the men folk are looking forward to seeing it! I love their movies. Have you seen the previews?

I haven't seen the previews for it, first I heard of it was this book. I agree that the target audience was men, the book just seemed way too focused on the main point. It was as though I was being hit over the head with the same information on each page. I get that the screenplay is like that so the author had to work with what was there, I just wish it had been toned down. What works on film doesn't always work on paper.

I felt that it had the same tone as Fireproof. When we're caught up in something, that's all we think about - so for Adam, having a revelation about the importance of being a good dad and how he could do that was his main focus. I can't wait to see the movie - I think it will be an action-packed message!