There You'll Find Me by Jenny B Jones

I so wish Jenny B Jones would quit her day job so she could spend more time writing. Seriously. Those teens don't need her as a teacher. One or two books a year just isn't enough from this lady. 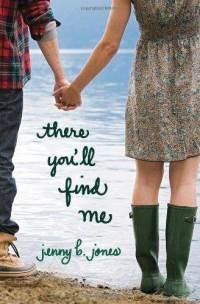 There You'll Find Me is the latest from Ms Jones. In this novel she crafts a story based on a minor character from a previous book, Save The Date. Finley Sinclair shines as a main character and solidifies that this author is one that I will read as long as she writes.
Finley Sinclair is a hotel empire heiress whose antics have garnered media attention. She's changed her ways though and plans to spend most of her senior year studying in Ireland. On the flight over she has a chance encounter with film star Beckett Rush. She's a little more than unimpressed by him and is happy to walk away from him when the plane lands. She arrives in her new town to the family that she's staying with, in a B&B. High school is pretty much the same for her there as it was in the states. Snobby girls are everywhere (it's universal!) One seems to have it out for her when she realizes that Finley is staying in the very B&B that Beckett is staying in.
Beckett has his own set of issues to deal with. He's got a wild child party image and is in the tabloids weekly with his exploits.
This book has so many layers in it and it's all woven together so well that when I finished it I let out a little satisfied sigh.
If you only read one YA book this year, please pick this one! Jenny B Jones has made her mark in the YA arena and while this novel isn't as snarky as some of her others it's sweet and heartwarming. Perfect.
Thanks Jenny, for this CLEAN READ.
This book was provided for review by Booksneeze & Thomas Nelson.
Purchase it here beginning on Oct 4th.
Posted by Suzanne at 8:38 AM