Shadows on the Sand by Gayle Roper 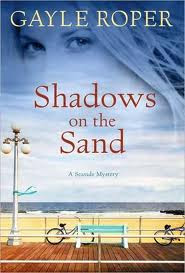 I wanted to love this book. Her Amhearst Mystery series featuring Merry Kramer is one of my all time favorites. This, however, was a disappointment for me. Carrie ran away at a young age, taking her little sister with her, to escape a dangerous home life, the young girls ended up in Seaside, New Jersey where they built a new life for themselves and now Carrie owns her own restaurant, Carrie's Cafe, where her sister Lindsay works in the kitchen. Life is good for the people here in this little tourist town. Until a drug dealer makes his presence known, two escapee's from a cult are hunted down by the cult leader (one murdered), Carrie's mom reappears magically into her life, completely changed, and other odd coincidences occur. This book was predictable and unbelievable. There were so many exclamation marks that I found it hard to read and the dialogue was unrealistic at times. It took me several chapters to get into the book and then I had to stop from chapter to chapter to figure out who was telling the story because it was told from so many different characters points of view. I never connected with the characters and honestly couldn't wait until the story ended. The tweeters and facebookers were seen more like annoying paparazzi than regular people.
I really found it unbelievable that Carrie, a restaurant owner, would be squeamish about putting a piece of squid onto a fish hook so she could go fishing with the man she likes. Wouldn't a restaurant owner be used to handling raw meat? That just didn't make sense.
Like I said, I wanted to love this book as much as I'd enjoyed the ones that I've read by this author before but it just didn't do it for me.

About the book:
She serves him breakfast at her cafe every morning … but he never seems to notice her.


Carrie Carter’s small cafe in Seaside, New Jersey, is populated with a motley crew of locals … although Carrie only has eyes for Greg Barnes. He’s recovering from a vicious crime that three years ago took the lives of his wife and children—and from the year he tried to drink his reality away. While her heart does a happy Snoopy dance at the sight of him, he never seems to notice her, to Carrie’s chagrin.

When Carrie’s dishwasher is killed and her young waitress disappears, Greg finds himself drawn into helping Carrie solve the mysteries … and into her life. But when Carrie’s own painful past becomes all to present, her carefully constructed world begins to sink.

Will the fragile relationship she’s built with Greg implode from the weight of the baggage they both carry?

This book was provided for review by Waterbrook/Multnomah.