No We Can't by Robert Stearns 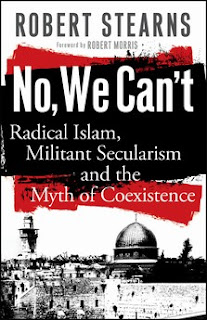 This review was written by a guest reviewer, my husband.

In his book, No, We Canʼt, Robert Stearns challenges our thinking on the idea that we can all just coexist. While the idea of coexistence sounds nice, this book explains many of the reasons why it will not & can not, work.Stearn’s focus is that the houses of militant secularism and radical Islamare threatening the freedoms that we enjoy in the West.I found this book to be both thought provoking and alarming at the same time. Many who pick it up to read will certainly view it as just one mans way to try and scare us in regards to Islamic take over. While others will be challenged to be more vigilant and aware of what is happening on a daily basis.I recommend you read No We Can't: Radical Islam, Militant Secularism,and the myth of Coexistence to learn how real the battle is for the souls ofmen.

The world is shifting. It is dissatisfied, baffled and craving transformation.

Religious tolerance is prized more than truth. From clever slogans to celebrity endorsements, we are bombarded with seemingly peaceful messages of coexistence.

But beneath the bumper stickers and T-shirts is buried this truth: Coexistence is a myth. Instead, a war for world domination is raging--between radical Islam, secularism and Judeo-Christianity.

What does it mean for you as a believer and why should you care?

From years of global outreach, Robert Stearns predicts a coming perilous culture clash. With clarity and astonishing depth, he shows you

The ultimate dominance of any of these worldviews will create a tipping point in global culture. What role will you play?

Robert Stearns is founder and executive director of Eagles' Wings, a global movement of churches, ministries, and leaders; the publisher of Kairos magazine; and founder of the worldwide Day of Prayer for the Peace of Jerusalem. Stearns consults regularly with high-ranking government, international, religious, and business leaders and is a frequent columnist in Charisma and Ministries Today magazines. He has been featured on WABC in New York City, GODTV, The 700 Club, 100 Huntley Street, TBN, and many others. Robert and his family live near Buffalo, New York, and spend a great deal of time in Jerusalem.

This book was provided for review by Bethany House. You can purchase it here.