The Secret Life of a Fool by Andrew Palau 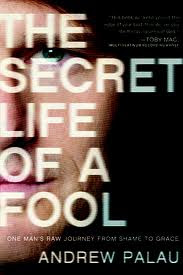 Andrew Palau's Secret Life
From getting wasted to getting saved by God's grace, son of popular evangelist shares his incredible journey with raw honesty

(NASHVILLE) Andrew Palau's story is not unlike the stereotypical Preacher's Kid.

Son of international evangelist Luis Palau, he had it all: a loving home, two role-model parents, and a strong church that provided a faith foundation.

Yet for reasons inexplicable to everyone, Andrew included, he turned his back on it all.

"People seem to want guys like me – son of a preacher man – to have some scandalous reason for all my 'mistakes,'" he says. "But my scandal is less of what you might expect, and more like something we all deal with."

Andrew lived up to Jay-Z's lyric, "Life begins when the church ends." He craved social acceptance and popularity, and pushed the absolute limits in everything he did. He dropped gallons of gasoline from highway overpasses, made Molotov cocktails, drank, and did drugs. He was cruel. One night, after being kicked out of a Red Sox game drunk, he convinced his buddies to kick a homeless man "for fun."

In his first book, The Secret Life of a Fool: One Man's Raw Journey from Shame to Grace Andrew describes his dark days of rebellion and the moment that turned it all around.

"God revealed himself to me in that time, and that place—and my life has never been the same," he says, speaking of a profound trip to Jamaica with his father. Originally intending to go for just one reason (partying), he instead experienced a life-altering encounter with God.

The Secret Life of a Fool is Andrew’s gritty story of running from God and the unforgettable, heart-healing grace that turned him back to God.

Today Andrew is an international evangelist in his own right, organizing outreach events worldwide for the Palau Association and regularly sharing the gospel with tens of thousands. Andrew can be heard on the daily radio program Reaching Your World, which is on more than 850 radio stations in 27 countries. Together, the Palau team has been featured in some of the world’s leading media outlets: the Associated Press, Forbes Online, The Washington Post, CNBC Asia and USA Today. He lives in Portland with his wife and three children. Lean more at Andrew.palau.org.

This book was provided for review by Worthy Publishing, a division of Worthy Media, Inc., is a privately held company whose mission is helping people experience the heart of God. Worthy is an independent voice in Christian publishing, managing editorial, marketing, publicity, sales, and distribution from its home offices in Brentwood, TN. Worthy focuses on a boutique list of new books each year, crossing a broad spectrum of genres, including fiction, Bible study, current events, devotionals, biography, leadership, specialized Bibles, as well as spiritual and personal growth.

I'm so glad I had the opportunity to read The Secret Life of a Fool. It's an amazing testimony of one man and how his life was changed by a God who never gave up on him. By parents who never stopped praying. By a special woman who saw beyond the mistakes and realized that God had a plan that was bigger than she could imagine.

While I wouldn't be as open about my own mistakes, on paper-for the world to read, Andrew's courage is to be commended. He shares openly about his past and even about the bridges he burned and relationships he ruined by living life carelessly. His experiences remind us that grace is for everyone.
Posted by Suzanne at 3:39 PM