The Messenger by Siri Mitchell 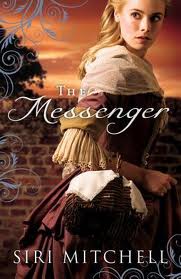 The Messenger is Siri Mitchell's latest historical novel, and the first of her historicals that I did not enjoy at all. The story idea was interesting: Young Quaker lady whose twin brother is thrown in jail, she ends up being a spy and aids in helping numerous prisoners escape. The way the story was told was unbearable. It was told in first person by two characters and it dragged and dragged. This book took me almost two weeks to read (I'm the type who normally reads a book in 2-3 days), it just didn't capture my attention at all.

It was hard to read Hannah's telling of the story because she talked in "thee's". It was hard to concentrate on. I was so glad when I finally finished this book!

I suppose that once in a while an author will produce a dud, hopefully this is it for Siri, as I've enjoyed all of her other historical novels. I won't give up on her because I've found that she's proven herself over time. I look forward to her next work.

This book was provided for review by Bethany House.
Posted by Suzanne at 8:45 PM

Thanks for taking the time to write and post a review.