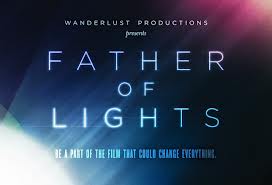 Father of Lights is the third film by Darren Wilson (Finger of God, Furious Love) and is the first that I've seen. I was not prepared for what I was about to see when I started watching this film last night. The movie follows several people in several different countries who show through their lives the love of God the Father. Half of the time I sat in jaw-dropping wonder while I watched the weaving of lives and the wooing of God to capture more of His children. Moved to tears, it took everything in me not to sob at points.
If you want more out of your own relationship with the Father. If you know someone teetering on the edge. If you don't know Him at all. If you know someone who needs to know Him.
If any of this pertains to you then you need to see this movie.  Even if it doesn't pertain to you, you will be blessed and challenged by this film. There are so many elements in it that prove, yes, PROVE that there is a God and that He cares about His creation.

Go here to watch the trailer of this movie.

I'm also able to give away a copy of this fantastic movie. Please leave a comment below and you'll be entered to win. Winner will be chosen on November 4th.


About Father of Lights
FATHER OF LIGHTS chronicles the journey of filmmaker Darren Wilson and his team as they fearlessly travel the globe, far from the daily existence of the typical evangelical believer in the West. By thoughtfully documenting the stories of extraordinary believers and candidly filming miracles, visions and other supernatural occurrences, Wilson engages viewers in modern day examples of the true nature and character of God.

Wilson gives honest access to his own spiritual questions as he tackles the religious misconceptions he has struggled with throughout his life.  “I went into making this film by asking the simple question: who is God? I wanted to know His character, His personality, and who He truly is. To answer this question, we had to peel back the many layers of religious garbage that has been passed onto him through generations. That He is angry. Vengeful. Wrathful. And in general, that He doesn’t like you very much. The truth, as you will see vibrantly in this film, is that He is the most loving, compassionate, and wonderful Father you can imagine.”

About Wanderlust Productions
Wanderlust Productions is a video production company focusing on creating content for various media that highlights, informs, and is designed to spiritually stretch our audience.  Created by Darren Wilson, Professor at Judson University, Wanderlust’s focus is on telling stories that inspire and agitate, that are unwavering in their honesty yet are emotionally compelling.  While our content will always be Christian in nature, we are not afraid to explore themes, concepts, or areas that may be considered “risky” by the Christian establishment.  Wanderlust prides itself on its willingness to put the story above the message.  That being said, the message will never waver.

"Disclosure of Material Connection: I received one or more of the products or services mentioned above for free in hope that I would mention it on my blog. Regardless, I only recommend products or services I use personally and believe will be good for my readers. I am disclosing this in accordance with the Federal Trade Commission's 16 CFR, Part 255: "Guides Concerning the Use of Endorsements and Testimonials in Advertising."

It was a fantastic movie. Watched it with a friend and I am reading the book, Filming God by Darren Wilson. Cool stuff. =)

This is the only one of his movies that we don't own/haven't seen. Darren Wilson spoke at our main campus just before Father of Lights released. I'd love to win a copy!