Nowhere But Up by Pattie Mallette with A.J. Gregory 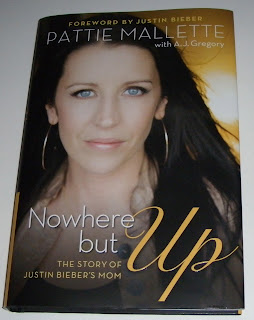 You may think Nowhere But Up is just the story of Justin Beiber's mom and that it doesn't mean a thing at all to you. But you'd be wrong. At least, I was. This book was absolutely an answer to my prayers and questions. I started it a little too late last night and stayed up a lot too late because I couldn't put it down. Finished it first thing this morning and was late to work because of it. It was exactly what I needed to hear.
Pattie Mallette was an abused child. She had several molesters. Her father left when she was little. Her mother eventually remarried. She turned to drugs and alcohol and the partying life. She was a victim of date rape. She slept around.
But during all of this she found Jesus. She attended church with neighbors when she was little. As a teen she was befriended by a youth pastor.
She was exactly the child and teen that my family has been ministering to for decades. My in-laws had an inner city church in Pittsburgh for many years. My husband helped at a large church in Phoenix. We ministered to city kids in Illinois. Our current church has a large outreach to the children and teens of our depressed city.
I've often wondered what happens next. I get discouraged when I don't see the changes. When their (kids/teens) situations seem to worsen instead of get better.
The Lord has been telling me quite blatantly over the past month or so that it's about planting seeds.
Pattie's story is one that I needed to read because I was ready to give it up. To quit trying. To quit planting.
This is a life that was changed because someone took the time to share with her. She then took the time to trust Jesus. Her life was never the same after that.
You've got to read this inspiring story. And then reach out to those around you. You never know what someone's going through. And you just might plant the seed that they need.

This book was provided for review by the Baker Publishing Group.