A Clearing in the Wild by Jane Kirkpatrick 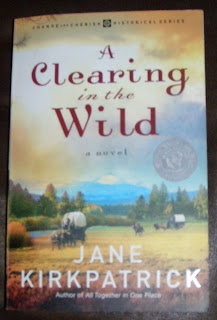 A Clearing in the Wild by Jane Kirkpatrick is a re-release originally published in 2006. I'd never heard of this title before agreeing to review it and was blown away by the story. I was fascinated by the cultic actions of the group leader and the way the people followed him without question. Based on a true story, it amazed me to think about the journey that these people made across our great land. Immigrants from Germany, first settling in Pennsylvania, then Missouri, and finally traveling to the Pacific North West. What hard workers they must have been.
Emma, the main character, is a refreshing change from wimpy helpless women, and she is based on a real person. Fascinating! I highly recommend this novel.

From the back cover:
A community searching for refuge, a woman finding her voice. The people of Bethel, Missouri, seek to live with simplicity and generosity, existing in the world of the 1850s but remaining set apart from its distractions and vanities. Rather than finding peace in this would-be utopia, spirited young Emma Wagner chafes at the constraints of a culture that values conformity over independent thought, especially in women.
When Emma's outspoken ways and growing skepticism lead to a clash with the colony's beloved leader, she finds new opportunities to pursue her dreams of independence. But as she clears a pathway West to her truest and deepest self, she discovers something she never expected: a yearning for the warm embrace of community.

Jane Kirkpatrick is the award-winning, best-selling author of two non-fiction books and eleven novels, including A Name of Her Own and the acclaimed Kinship and Courage series. Jane is the winner of the coveted Wrangler Award from the Western Heritage Center and National Cowboy Hall of Fame. A licensed clinical social worker as well as an inspirational retreat leader and speaker, she lives with her husband on 160 acres in Eastern Oregon.
I received this book for free from WaterBrook Multnomah Publishing Group for this review.