Wings of Glass by Gina Holmes 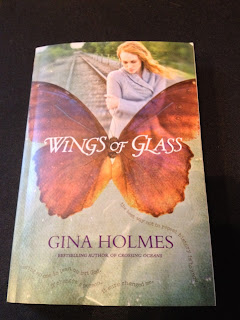 Wings of Glass by Gina Holmes is a novel written in a memoir style. It's gripping and heartbreaking, and at times angered me. It's about Penny, a young woman married to an abusive husband, and how she deals with it. From what I've heard from abused women, it's all too real.
It angered me that Penny had help right in front of her but she refused to accept it. She made excuses for her louse of a husband and argued to the point of losing those she loved in favor of that man.
I had the chance recently to speak to several women who've dealt with this same thing and this story is all too real.
If you are living in an abusive situation YOU NEED TO GET OUT. God does not condone that, nor does He want it for you. No matter what you've been told. It is wrong.
This book will, prayerfully, open some eyes. It's my hope that it will help women get the assistance that they need.
Kudos to Gina Holmes for attacking this subject. Well done.

From the back cover:
On the cusp of adulthood, seventeen year old Penny Carson thought she'd found her Prince Charming in farmhand Trent Taylor. With flashy promises and a handsome face to back them up, Trent was her escape from an overbearing father and her one-stop-sign town. But Penny's happily ever after lasts no longer than their breakneck courtship.
Out of options, she resigns herself to the fate of a woman controlled by a man with no control...until a welding accident at work forces Trent to finally allow Penny to take a job cleaning houses. Here she meets two women from very different worlds who open up her life to endless possibilities, teach her to live and laugh again--and lend her their backbones just long enough for her to find her own.

This book was provided for review by Tyndale.

Thanks so much for taking the time to read and review it. Writing it opened my eyes. I hope it helps some others too.