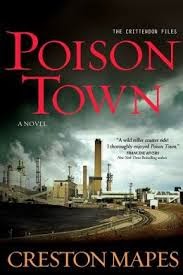 Fast moving and full of twists and turns that I never saw coming, Poison Town by Creston Mapes was almost a little over my head.
Reminiscent of a Julia Roberts movie this novel about a powerful manufacturing company and the hold it has on mostly everyone, while sickening others, is and all too real portrayal of corporate greed and the ends to which a company will go to keep its secrets.
I had a hard time keeping the names and characters straight in the beginning because there were so many. Also, in the beginning some of the "hillbilly" types talked in a jargon that included words like "git" and I found it hard to read, that tapered off though and they switched to normal talking.
This book was a quick read, took just a little over two hours to get through. I enjoyed it, but not as much as other genre's. I prefer something a little more light hearted.

In this breathtaking follow-up to Fear Has a Name, investigative reporter Jack Crittendon learns his long-time friend and mechanic has fallen suspiciously ill. The man’s likeable sons and neighbors blame a mega-manufacturing plant on the poor side of Trenton City, Ohio, for the sickness and death ravaging their loved ones.

When Jack investigates, he becomes engulfed in a smokescreen of lies, setups, greed, and scandal. The deeper he digs, without his editor’s permission, the more toxic the corruption he uncovers. As Jack meets the big-time players behind the scenes and tries to beat the clock before more people die, he realizes the chillingly unthinkable—he knows too much.

Author Bio(s)
Creston Mapes is the author of Fear Has a Name, Nobody, Dark Star, and Full Tilt. A journalist, copywriter, and editor, he works from his home-office in Atlanta for some of the nation’s top media companies, Christian ministries, and nationally-recognized corporations. His early years as a reporter inspire many of his novels.

This book was provided for review by David C Cook Publishing.

You can purchase a copy here.