Veil of Secrets by Shannon Ethridge and Kathryn Mackel 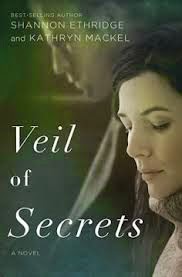 I've read numerous books by Kathryn Mackel and a few of Shannon Ethridge's. This collaboration on Veil of Secrets is one that I really didn't enjoy. I trudged through the first one hundred pages hoping that it would gain momentum and then it finally did, but then I felt like I was being preached at and was exploring my own marriage issues in the fictional husband-wife therapy sessions. The characters never came alive to me and there were so many of them that it took me until about page one hundred to figure out who was who. There was one character (David) that I'm still not sure who he was. It got bored again towards the end of the book so finished the last twenty pages or so in just a few minutes as I skimmed them. There was a lot left undone, questions unanswered (the whole Joshua thing, for one).
I didn't enjoy my time with this book. It was a let down.

Can a mother face the secrets of her past in order to protect her daughter from the same mistakes?
Melanie and Will Connors seem like the perfect couple, but their marriage only looks good on the outside, having withered inside from a lack of intimacy.
The barriers Melanie faces to intimacy are hidden in her past—a misguided tryst with a trusted friend of her father's, a pattern of promiscuity as a teen, empty relationships in early adulthood. The only way Melanie sees to save herself from herself is to turn off her desires—even in her marriage.
Will insists they either work on the marriage—or work on the divorce. Their attempt at restoration occurs in the midst of a New Hampshire presidential primary that is rocked by violent protests and razor-sharp character assassinations. For the first time, their marriage begins to feel like a safe place.
As Melanie tries to sort through her own past, she sees her 16-year-old daughter's head turned by a charismatic older man on Will's campaign team. Can Melanie sift through her own rubble and find the voice to help guide her daughter—and possibly find the joy that God intended for her marriage?
This book was provided for review by BookLook and Thomas Nelson
Posted by Suzanne at 6:46 PM