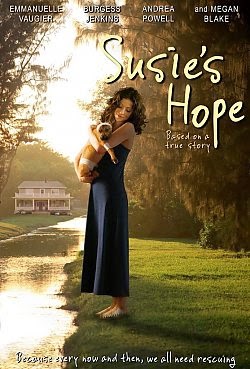 Warning: this is a tear-jerker. I started crying at the beginning and the tears really didn't let up until it was over.
If you've ever loved a fur baby then you will love this film. Based on a true story it is about love, loss, and learning to trust again. There were some scenes that may not be suitable for young children as they are quite graphic. The dog attack is re-enacted and could be quite scary. The images of the abused dog could also make one feel queasy.
Overall this was a very good film with a good message. Bad circumstances don't have to have bad outcomes. Visit the website for Susie's Hope to learn more or to donate.
If you have young children you will want to watch this with them so you can discuss the different scenes.
About the movie: Run time 105 minutes

Based on the true story that successfully passed Susie’s Law in North Carolina, which seeks stricter punishment for animal abusers, Susie’s Hope brings to life the inspirational relationship between pit bull attack survivor Donna Lawrence and Susie, a pit bull-mix puppy found beaten, burned and left for dead. Recognizing reflect and abuse were to blame for the tragic attack that nearly claimed her life 10 months earlier, Donna resumes the battered animal and accepts her as family. Together, they learn to heal, love and forgive as thyey lead a historic effort to seek justice and protection, not only for Susie, but all animals. Starring Emmanuelle Vaguer (40 Days and 40 Nights), Burgess Jenkins (Remember The Titans) and Andrea Powell (Ender’s Game, The Twighlight: Breaking Dawn Saga: Part 2), Susie’s Hope is an incredible story of love, loss and redemption.
About Susie:
Susie was found nearly dead in Greenfield Park in Greensboro, North Carolina on August 20, 2009. Just a puppy, Susie had licked the face of her owner’s newborn baby. Her owner became violent—she was beaten so severely her jaw was broken. That wasn’t enough, though. She was then set on fire and left for dead. Incredibly and against all odds Susie survived. Donna Lawrence adopted her two months later. Susie is now a trained therapy dog and event won the American Humane Association’s American Hero Dog this year!


This was provided for review by FlyBy Promotions.
Posted by Suzanne at 3:41 PM