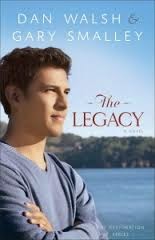 The Legacy by Dan Walsh and Gary Smalley is the fourth and final book in their Restoration series. This time around we focus on Doug's story. This was probably my least favorite of the four books, I didn't like how quickly everything was wrapped up and ended. I wanted to engage with the Anderson family a little more, it seemed like they needed a way out and Doug's story with the shocking conclusion took care of that.


Doug Anderson has been drifting slowly but steadily away from both his family and his faith. His parents, along with Christina, a young woman taken into the family during a crisis pregnancy, have been trying to reach him before he falls too far. But sometimes you have to hit bottom before you’re ready to grow up and give your life over to God. Christina’s feelings for Doug have been growing, even though he writes her off as not worth his time. Will Doug’s own crisis finally clear his vision and help him focus on what he has right in front of him?

This book was provided for review by Revell.