Bringing Maggie Home by Kim Vogel Sawyer was a book I could not put down. The tension between the mother-daughter relationships was far too real and the working through decades of misunderstanding was beautiful. The mystery included in the story was heartbreaking and likely a truthful telling of some missing children nearly one-hundred years ago. This book reminded me a little of Before We Were Yours by Lisa Wingate, which came out earlier this year.

From the back cover:
Decades of loss, an unsolved mystery, and a rift spanning three generations. Hazel DeFord is a woman haunted by her past. While berry picking in a black-berry thicket in 1943, ten-year-old Hazel momentarily turned her back on her three-year-old sister, Maggie, and the young girl disappeared.
Almost seventy years later, the mystery remains unsolved, and the secret guilt Hazel carries has alienated her from her daughter, Diane, who can't understand her mother's overprotectiveness and near paranoia. While Diane resents her mother's inexplicable eccentricities, her daugher, Meghan-a cold case agent-cherishes her grandmother's lavish attention and affection.
When a traffic accident forces Meghan to take a six-week leave of absence to recover, all three generations of DeFord women find themselves unexpectedly under the same roof. Meghan knows she will have to act as a mediator between the two headstrong and contentious women. But when they uncover Hazel's painful secret, will Meghan also be able to use her investigative prowess to solve the family mystery and help both women recover all that's been lost? 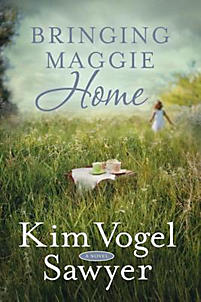 This book provided for review by Litfuse
Posted by Suzanne at 8:07 AM