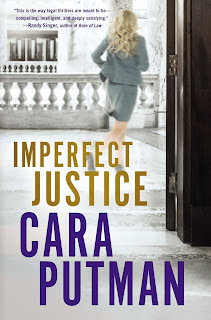 Imperfect Justice is a legal thriller by Cara Putman. It is filled with everything the Christian fiction enthusiast loves to read...romance, suspense, drama, all without the addition of anything to label this an unclean read. This book was a little difficult for me to get into, but after the first few chapters it had my attention. The pace moved along steadily and I really liked getting to know Emilie and Reid. It seemed to me that the story ended rather abruptly, like it was all tied up and wrapped with a bow and just handed off. I enjoyed it, just not as much as some of Cara's other works.

From the back cover:

THE POLICE SAY THE WOMAN WAS A MURDERER. EMILIE WESLEY KNOWS THEY CAN’T BE TALKING ABOUT HER CLIENT . . . CAN THEY?
To the world it seems obvious: Kaylene Adams killed her daughter and then was shot by police. Attorney Emilie Wesley knows a different story: Kaylene would never hurt anyone and was looking for a way out of a controlling, abusive relationship. Her death shakes Emilie’s belief that she can make a difference for women in violent marriages. Self-doubt plagues her as she struggles to continue her work in the wake of the tragedy.
Reid Billings thought he knew his sister—right up until he learned how she died. He discovers a letter from Kaylene begging him to fight for custody of her daughters if anything should happen to her. No attorney in her right mind would support an uncle instead of the father in a custody case, but Kaylene’s letter claims Emilie Wesley will help him.
Thrown together in a race to save Kaylene’s surviving daughter, Emily and Reid pursue the constantly evasive truth. If they can hang on to hope together, can they save a young girl—and find a future for themselves in the process?

This book provided for review by Litfuse
Posted by Suzanne at 6:28 AM