The Light from Distant Stars by Shawn Smucker 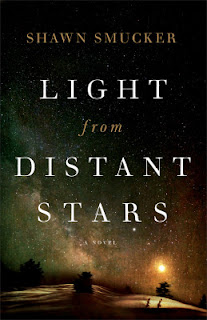 The Light from Distant Stars by Shawn Smucker hooked me from the first page. It's a book that combines the past and present in the life of Cohen Marah to reveal sins hidden and forgotten. Cohen was an observer, he grew up watching his parents and how they reacted to their situations. He held his hurt inside and ended up in a battle bigger than he knew how to handle. As an adult the stories of his past rush back to him when he finds himself in a stressful situation. Everything comes together bringing life and death.
Reminiscent of Travis Thrasher, there was a little I didn't understand, but the story was so good that I was able to overlook it.
I have enjoyed everything I've read from this author thus far and look forward to what he's got in the works.

This book provided for review by Revell.

When Cohen Marah steps over his father’s body in the basement embalming room of the family’s funeral home, he has no idea that he is stepping into a labyrinth of memory. As the last one to see his father, Cohen is the primary suspect.
Over the next week, Cohen’s childhood memories come back in living color. The dramatic events that led to his father being asked to leave his pastoral position. The game of baseball that somehow kept them together. And the two children in the forest who became his friends–and enlisted him in a dark and dangerous undertaking. As the lines blur between what was real and what was imaginary, Cohen is faced with the question he’s been avoiding: Did he kill his father?
In Light from Distant Stars, master story weaver Shawn Smucker relays a tale both eerie and enchanting, one that will have you questioning reality and reaching out for what is true, good, and genuine.
Posted by Suzanne at 3:00 PM