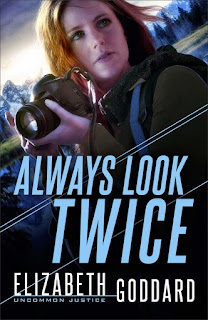 Always Look Twice, by Elizabeth Goddard, is a fast-paced adventure that draws the reader in from the first page. It kept my attention throughout and also kept me guessing until the very end. I liked seeing the action through the eyes of a photographer who is known for catching detail on film. It added an extra element that was interesting. This book is part of a series but reads fine as a stand-alone novel. Good mix of suspense and romance. And it's a clean read.

From the back cover:
At the advice of her therapist, Harper Reynolds has traded her job as a crime scene photographer for a more peaceful life taking pictures of the natural world. But her hopes for a life surrounded by serenity of the outdoors are dashed when she inadvertently captures a murder being committed. She flees the scene in fear--and loses the camera.
Former Green Beret Heath McKade, a reserve deputy in an understaffed county, has been called in to protect Harper, a childhood friend he is surprised to see back in the area. When Harper learns that the sheriff's department can't find any evidence of the murder she witnessed, she is determined to do what she can to see that justice is done. What neither Harper nor Heath could know is how many explosive secrets from the past will be exposed--or how deeply they will fall for each other.

This book provided for review by Revell.
Posted by Suzanne at 10:18 AM