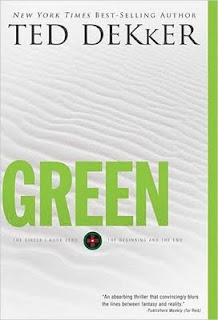 Guest review by my sweet husband.
This book was provided for review by Thomas Nelson.

Green, by Ted Dekker, is the beginning and the end of the Circle Series. Book 0.

How can one book start and finish a series? I’m still not exactly sure, but Green did! Picking up where White left off and leaving off where Black picks up, Green completes the series. It pulls in the Circle Series and the Paradise Series, and answered a lot of questions that I had in reading the other books.

It has been ten years of running and hiding for the Circle of albinos. The Horde has relentlessly threatened them and even killed people to prove their hatred for Elyon’s lovers. Samuel of Hunter, Thomas Hunter’s son, is ready to wage war on the Horde. Thomas and his wife Chelise try to convince the dividing Circle that killing Horde goes against all that Elyon has shown them and would only bring more violence. Thomas issues a challenge to the Horde leader and Dark Priest, hoping to end the debating, but things spin out of control. Samuel allies with the Half-breeds and nearly half the Circle follows him.

In desperation to save his son and the Circle Thomas returns to the Histories. While there, Kara Hunter and Monique de Raison are asked by a mind-reading, red-headed, young man to reveal a guarded secret that could prove disastrous. Here in lyes the connection to the Paradise Series.

I did find it to be more violent then the other Circle books and some of the gruesome images of blood (Vampirism) were rather disgusting (just as a warning to younger readers and/or those with a light stomach.) I will say that Dekker’s delve into the whole Vampire rave was a bit disappointing.

Over all I would say it is a must read in the Circle Series. If you read it as book one it makes a bit more sense for the sake of Thomas’ son. If read as book 4 it really ties the whole series together.