The Bridegrooms by Allison Pittman 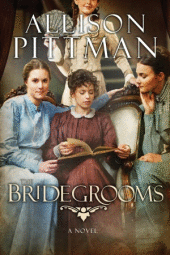 The Bridegrooms by Allison Pittman is a fantastic escape to a time in history when women were to be seen and not heard. Vada Allenhouse is the oldest of four sisters, all still single and still living at home with their physician father. The mystery of their mother's disappearance many years before is never far from her mind and the man she's been courting seems reluctant to make a commitment to her. Add to that a sister that doesn't speak (to anyone!), a sister who is corresponding with suitors through the mail and a sister whose head turns at the next handsome man that walks by. It all adds up to a lot of fun and a little intrigue. Who is the man lying unconscious upstairs? This book is very well written and is an enjoyable read. Even with a lot of characters I found it easy to follow. The only thing that bothered me (and I know this isn't the author's fault!) is that the back cover copy starts with, "Tragedy hit the Allenhouse family on a hot summer night...." and then the prologue begins with "Winter 1881...." when the tragedy happened. I know that's a minor thing but I couldn't stop thinking about it. I always seem to find the little things like that when I read.
About the book:
Tragedy hit the Allenhouse family on a hot summer night in Ohio when a mother of four vanished. Eight year old Vada virtually grew up overnight and raised her three younger sisters while her father lost himself in his medical practice in the basement of their home.
Now Vada is a grown woman, still making her home with her father and sisters. Her days are spent serving as an errand girl for Cleveland's fledging amateur orchestra; her evenings with Garrison Walker, her devoted, if seemingly passionless, beau.
Dizzying change occurs on the day the Brooklyn Bridegrooms come to town to play the Cleveland Spiders and a line drive wallops the head of a spectator. The fan is whisked to the Allenhouse parlor, and questions swirl about the anonymous, unconscious man.
Suddenly, the subdued house is filled with visitors, from a flirtatious would-be sportswriter to the Bridegrooms' handsome star hitter to the guilt-ridden ballplayer who should have caught the stray shot. The medical case brings Dr. Allenhouse a frustration and helplessness he hasn't felt since his wife's disappearance. Vada's sisters are giddy at the bevy of possible suitors. And Vada's life is awakened amid the super-charged atmosphere of romantic opportunity.
This book was provided for review by the Waterbrook Multnomah Publishing Group.
About the author:
Allison is a former high school English teacher, she serves as director of the theater arts group at her church. Allison makes her home in Texas with her husband and their three boys. Learn more about her at her website.
Posted by Suzanne at 8:58 AM

I know those "minor things" can be distracting,and I apologize. It's a victim of the publishing process...Back cover copy is written months before the book is finished. Initially, I had no intentions of including a scene where Mrs. Allenhouse deserts her children, but when the rest of the book was complete, I realized it was necessary. By that time, the phrase "hot summer night" was nowhere near the top of my mind. So, again, I'm sorry about the mistake!

Thank you, though, for your kind and gracious words about my book. This is the most "fun" of all my stories!