Thicker Than Blood by C.J. Darlington 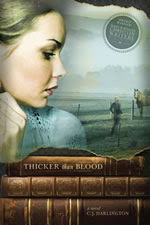 Thicker Than Blood by C.J. Darlington is an impressive debut novel. Drawing from her own work as a book scout, C.J. Darlington weaves a story of mystery, romance and true love that is unlike any I've read before. If you're a lover of books then this is one that you HAVE to read. I enjoyed every moment of reading this book, from learning what makes some copies of books more valuable than others to the nail biting suspense of hoping Christy avoids the clutches of the man chasing her to the joy of watching Christy be wooed by our Savior. I give this book two thumbs up. Can't wait to read the sequel!
About the book:
Thicker Than Blood Tyndale House Winner of the 2008 Christian Writers Guild Operation First Novel contest.
Christy Williams finally has her life on track.
She’s putting her past behind her and working hard to build a career as an antiquarian book buyer. But things begin to unravel when a stolen Hemingway first edition is found in her possession, framing her for a crime she didn’t commit.
With no one to turn to, she yearns for her estranged, younger sister, May, who she abandoned in their childhood after their parents’ untimely deaths. Soon Christy’s fleeing from her shattered dreams, her ex-boyfriend, and God. May’s Triple Cross ranch could be the safe haven she’s searching for, but will the sisters realize that each possesses what the other desperately needs before it’s too late?

C. J. began writing the story that would become her first novel Thicker than Blood when she was a fifteen-year-old homeschool student. She has been in the antiquarian bookselling business for over a decade, scouting for stores similar to the one described in Thicker than Blood before cofounding her own online bookstore. In 2006 C. J. started the Christian entertainment Web site TitleTrakk.com with her sister, Tracy, and has been actively promoting Christian fiction through book reviews and author interviews. She makes her home in Pennsylvania with her family and their menagerie of dogs and cats. When she's not writing, she's reading. Her hobbies include book and art collecting, fly fishing, painting and drawing. Visit her online at her blog where she talks about books, writing, and publishing. You can also look her up on Twitter and Facebook. 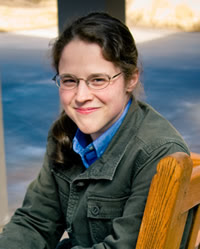