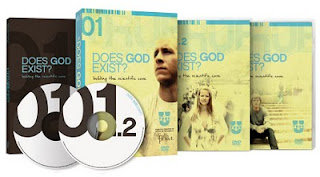 In this first DVD set of the TrueU series, Dr. Stephen Meyer plays a “philosophical survival game,” pitting four worldviews against one another in the quest to decide which one gives the best answers. Dr. Meyer examines the evidence and provides the tools needed for students to defend their faith and make it their own. This is the perfect resource for students preparing to enter college and a culture that may be hostile to their faith. Additional discussion guides can be purchased separately, either in singles (978-1-58997-115-8) or in a 10-pack (978-1-58997-116-5).

is director of the Discovery Institute's Center for Science and Culture (CSC) and a founder both of the intelligent designmovement and of the CSC, intelligent design's primary intellectual and scientific headquarters. Dr. Meyer is a Cambridge University–trained philosopher of science and the author of peer-reviewed publications in technical, scientific, and philosophical books and journals. He has been widely featured in media appearances on CNN, MSNBC, NBC, ABC, CBS, Fox News, PBS, and the BBC. In 2008, he appeared with Ben Stein in Expelled: No Intelligence Allowed. He's also featured prominently in two other science documentaries, Icons of Evolution and Unlocking the Mystery of Life.

Meyer's research goes to the very source of the mystery of life: its origin, and more specifically the origin of biological information as represented in DNA. Signature in the Cell, published by HarperOne in June 2009, presents a radical and comprehensive new case, revealing the evidence not merely of individual features of biological complexity but of a fundamental constituent of the universe, namely information. Meyer's work in biological information represents the cutting edge of the argument for design.

I received disc one and disc two to review from Tyndale Publishers. I thought this might be a fun way for my family to learn to defend our faith. What I found was a college classroom type setting with a professor lecturing his students. While this type of learning works well for some people it isn't what I prefer. I had a hard time paying attention to the lessons and grew bored rather quickly. Maybe I have a short attention span? This is full of a lot of information from both sides of the issue. Meyer backs up his research with facts and also counters his opposition with facts. Informative and timely, this is one video series that is sure to stir the scientific community.