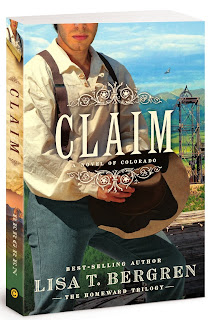 Claim by Lisa T. Bergren is the third and final book in her Homeward Trilogy and what a satisfying finale it is! Fast paced and filled with action and romance, this one is hard to put down (I read it in one day!) Lisa writes historical fiction like few others with characters who seem to come to life. I really enjoyed the American Indian theme in this book and also finding out what happens to Moira and Daniel. Fantastic book, my favorite in the series.
Thanks, Lisa, for this CLEAN READ!
About the book:

Dominic St. Clair has fought his way back from desperate circumstances and now has an opportunity to reunite with his sisters in Colorado. Lisa Bergren’s latest novel, Claim: A Novel of Colorado, reveals a man heartsick over his failure to keep a promise to his dead father and his inability to protect his two sisters from life’s harsh punishment. In an effort to find the peace that has always eluded him, Dominic begins a new venture in an old mine deep inside the Rocky Mountains. As he struggles to find success and meaning in this rugged landscape, Dominic discovers the affection of the local school teacher among the hidden treasures of the area. Will he finally claim his true inheritance, or will he succumb to the restlessness that has dogged his life since leaving Colorado years before?

Set amid the harsh and often unforgiving life of the early mining industry, Claim is the final installment in Bergren’s Homeward Trilogy and offers a look at God’s willingness to hold on to His children even though they reject His guidance and love. The reader walks with Odessa and Moira St. Clair as they experience their journey toward truth in the first two books of the series, Breathe and Sing, and in this final story, Moira must once again renew her trust in God as she struggles to accept God’s claim on her life and the love in her heart for a troubled man.

Fans of historical fiction and romance will find much to enjoy in this dramatic finale to Lisa Bergren’s Homeward Trilogy. Claim reflects the rugged journey that the St. Clair prodigals have made toward the truth of grace and forgiveness. As old wounds are healed, new struggles arise, and each of the St. Clair children must face the final battle that lies ahead as they struggle to make their way homeward. Once again, Bergren’s strong voice weaves a tale that will cause readers everywhere to examine the prodigal moments in their own lives and renew their faith in the One who is able to reach them no matter how far they run.

Claim: A Novel of Colorado by Lisa Bergren (Book Three in the Homeward Trilogy)

Read the first chapter of this book here.
Posted by Suzanne at 11:23 AM