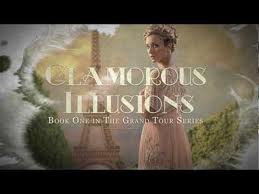 It is unfortunate that books such as Glamorous Illusions by Lisa T. Bergren aren't as easy to find as books without any substance. This book, the first in her Grand Tour Series, was a delight to read and I fully immersed myself into Cora's world.
The only thing that really bothered me was the way the book ended, very abruptly. I understand that it's the first in a series, but I want more. Now. Not later. *insert smiley face here*
Cora is a poor farm girl, accustomed to hard work. She wakes one day to find everything that she's ever known about home and family to be a lie. Thrust into a world that's unfamiliar, she soon finds herself taking The Grand Tour of Europe in the early 1900s.
It was interesting to watch Cora try to relate to those around her and to watch her grow into an even stronger young woman than she was at the beginning of the book.
This was truly a joy to read and I can't wait for the rest of the series.

From the back cover:
It's the summer of 1913, and Cora Kensington's life on the family farm has taken a dark turn. Not only are the crops failing, but someone dear to Cora is failing as well.
One fateful afternoon, a stranger comes to call, and Cora discovers a terrible secret about her past...a secret that will radically change her future.
Cora is invited to take the "Grand Tour" of Europe, a trip intended to finish a person's education and solidify an understanding of refinement and ancient culture. As she travels from England to France with kin she's never known, Cora encounters the blessings of a family name, as well as the curses. But when an unbidden love begins to form, she realizes there are far greater challenges ahead....
The first book in the Grand Tour series will take you on a journey of cultural refinement--but, moreover, on an inner journey of self-discovery.

Lisa T. Bergren is the award-winning author of over thirty-five books, with more than 2 million copies sold. A former publishing executive, Lisa now divides her time between writing, editing, parenting three children with her husband, Tim, and dreaming of her next trip to Italy.