Starring Me by Krista McGee 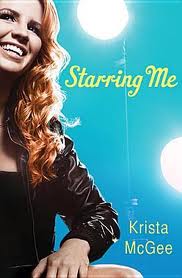 I haven't been this excited about a new author since I discovered the fabulous Jenny B. Jones. Krista McGee blew me away with her debut novel, First Date, and this follow up, Starring Me, is just as good, if not better. In we first met Kara and Addy in First Date (which told mostly Addy's story). This time we get to follow Kara McKormick as auditions for the role of a lifetime as co-host of a new teen based series in the likes of Saturday Night Live. This role to be filled is very specific and the girls auditioning for it have no idea that their "house mother" is actually the one they're auditioning for, and her real boss is teen singing sensation Chad Beacon, winner of America's Next Star. What ensues is a lot of girl-drama as the teens in the house try to outdo each other in front of their audiences, yet act like mini-diva's in the house, where it really matters. The only thing is, Chad and his family want his co-host to be a Christian girl and Kara, though she has all of the other qualities, isn't sure she even believes in God.

This is such a good book. Even though it's written for the YA audience, I loved it and can't wait until Krista's next book is released.

Teen girls will learn through the characters in the book and also through their circumstances. Krista writes the truth without being preachy. Excellent!

This book was provided for review by Booksneeze.

From the back cover:
Kara McKormick is told she's auditioning to star in a new teen variety show. It's what she isn't told that could change her life.
The feisty New Yorker moves or sunny Orlando to participate in a month-long audition, where she'll live with nine other contestants and an eccentric housemother. Kara knows that the show already has a big-time celebrity lined up for the co-host, but she doesn't know who it is.
Chad Beacon quickly rose to fame after winning America's Next Star, but he doesn't want his entire career to be about singing. There is so much more he wants to do-like act. The new variety show sounds like the perfect next step for him, but his parents want him to have a co-star who share his faith since they'll be spending so much time together.
Acting is high on Kara's priority list. But a relationship with God? Not so much. But God is after Kara's heart and He's put people in her life who are showing her there's far more to Christianity than rules and judgment.
And just when it seems that Kara's going to have to give up her acting dream, God reveals that she may have a starring role after all-in a story so big only He could write it.
Posted by Suzanne at 3:06 PM