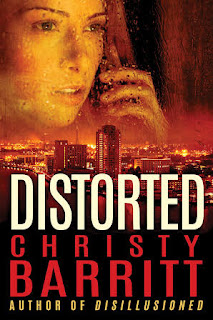 Christy Barritt is quickly becoming one of my favorite authors. I've read most of  her books and she releases more than any other author I read works from. I love that she's always got new stories for me.
Distorted is her newest release. This follows the story of Mallory Baldwin, a young woman rescued from being kept in captivity by her kidnapper and the murderer of her parents. Mallory finds herself in the middle of mystery and suspense as she realizes she is being hunted once again.
As with her other novels, Distorted had me captivated from beginning to end. I loved how Mallory's character used her past to help others and was dedicated to fight human trafficking.

As with her other novels, Distorted has a strong Christian theme and will point the reader to the Author of Life.

Mallory Baldwin is a survivor. A former victim of human trafficking, she’s been given a second chance, yet not a night goes by that she doesn’t remember being a slave to weapons dealer Dante Torres. Despite being afraid of the dark and wary of strangers, Mallory is trying to rebuild her life by turning her tragedy into redemption.To former Navy SEAL Tennyson Walker, Mallory seems nothing like the shattered woman he rescued two years ago, and he can’t help but be inspired by her strength and resilience. So when a stalker suddenly makes Mallory vulnerable once again, Tennyson steps up as her bodyguard to keep her safe.
Mallory and Tennyson’s mutual attraction can’t be ignored, but neither can Mallory’s suspicion that Tennyson is keeping a terrible secret about her past. As the nightmare closes in, it’s not only Mallory and Tennyson’s love that comes under fire but their very lives as well. Will their faith sustain them? Or will the darkness win once and for all?